To begin with, the monotony of the snow that weekend was broken by the pleasant breeze of coolness and fog. I was tempted to step out and go for a long drive. So he booked movie tickets for ‘Black Panther’ and hence we went to IMAX at Outlet Mall, Auburn Hills. I must say this was one huge mall which could not be completed in one visit. So while we were looking around, we saw a few good places for a good variety of cuisine. There was Sushi and Japanese grill, an American bar, Mex and another Asian food place. He said that he wanted me to try out Mex since I love spicy food.

So after the movie, we entered this starstruck place. I know there are many other outlets around the state but to experience food with that beautiful ambience is absolutely satisfying which sets every outlet distinguished from the rest. To the right, there was a wholesome bar counter with bottles set up in a manner that resembled a beach bar at Hawaii. There were bottles of attractive shapes and colours which reflected the light that played with their curves and sparkled the bar kitchen. Stepping inside felt like a palace with big lighted stars suspending from the ceiling which brightened the whole atmosphere. It was simple yet beautiful of the sort that could take away fatigue by the day’s end. 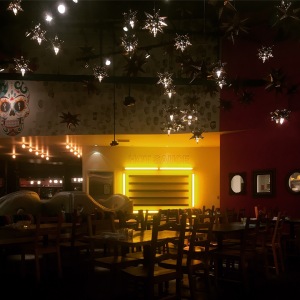 We looked at the bar and food menus. The bar menu had the best version of mexican cocktails with exotic names in espanol which I tried to decipher with whatever little knowledge I had. Going through the rest of the menu was quite a read with dramatic names giving the Mexican experience. No drink like the mexican drink proves right, for all the cocktails had interesting combinations not to be generally found at a bar. Going by a hunch, we decided to try the tequila El Jimador which heated us up for good. For sides we ordered a bowl of Guacamole, so perfectly blended and seasoned with pickled onions and tomatoes served with tortilla chips. I kept revisiting the menu because I couldn’t get my mind around what to order and then he suggested I try the Fajita Bowl and a Chicken Burrito for himself. It came with a stir fry of chicken shreds coated with authentic mexican seasoning, tempered with a flavoured oil, onions, peppers and tomato. I could smell that beautiful sizzle all the way to my table. And I had the first bite of rich kebab like smoky flavour of chicken that had a gentle hit of spices while the peppers and onions were coated with that seasoning of herbs and pit fire since it was served in an earthen bowl. As relishing as my fajita bowl was, so was the Chicken Burrito. It came with the traditional stuffing of lime rice, red beans, salad and roasted crispy chicken served with some gravy, salsa and sour cream on the side. He loved his wrap and downed it with satisfaction. On the menu, they also had my favorite dessert of fried ice cream with honey and caramel. The name itself sends water down my tongue. We were so full that we couldn’t think of getting it. Maybe another time. 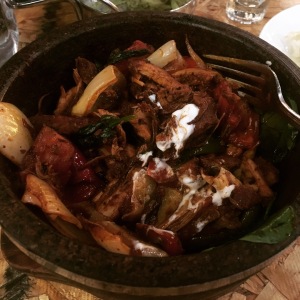 Stepping out, it got windy and we were glad we had El Jimador for the warmth. A late night drive back home, with a tummy full of soul food and a cool movie, what more could one ask for!